Join the Spring Edition of Punk Shock in a new adventure in the  mysterious Cloudbreak Islands, as part of the range of Skylanders SWAP Force  figures.

Please Note: This    is not a swappable character but the figure will still work with the    Skylanders SWAP Force game.

In Skylanders SWAP Force, Portal Masters embark on an all new    adventure in the mysterious Cloudbreak Islands, home to a mystical volcano    that erupts every hundred years to replenish the magic in Skylands. During an    epic battle, a brave group of Skylanders were caught in the volcano’s    eruption, which blasted them apart and sent them to earth. But, the magic of    the volcano gave these heroes a remarkable new power - the ability to swap    halves – turning them into a special team known as the SWAP Force. Meanwhile,    Kaos is back with a new evil plan. And now, Portal Masters everywhere must    reassemble the SWAP Force - in their original form or in new combinations -    and send them back to Cloudbreak to save Skylands!

These aren't just toys - they're toys with brains. Skylanders    figures unlock their own heroic challenges and remember all their in-game    experiences, so they can be played on and across all major gaming consoles!

Daughter to the most royal family in Wondrous Waters, Punk    Shock never really accepted her role as an undersea princess. She preferred a    much more exciting life - hunting with her electric crossbow and listening to    super-charged music. After journeying to the outer reaches of her kingdom to    find adventure, Punk Shock returned home to discover adventure had found her.    The kingdom and its people were magically frozen by the Snow Trolls, who were there to steal valuable treasure. Punk Shock used her awesomely charged    crossbow to single handedly defeat the Snow Troll army and melt the ice that    trapped her kingdom. Gill Grunt heard of the battle and quickly recruited Punk    Shock into the Skylanders. 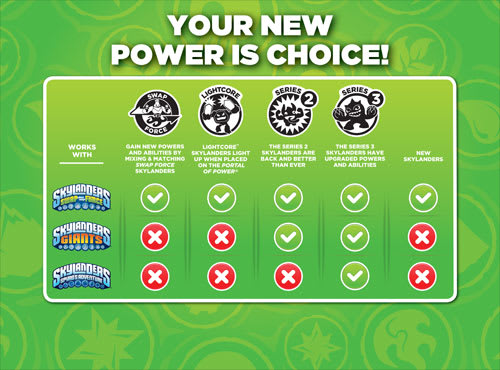